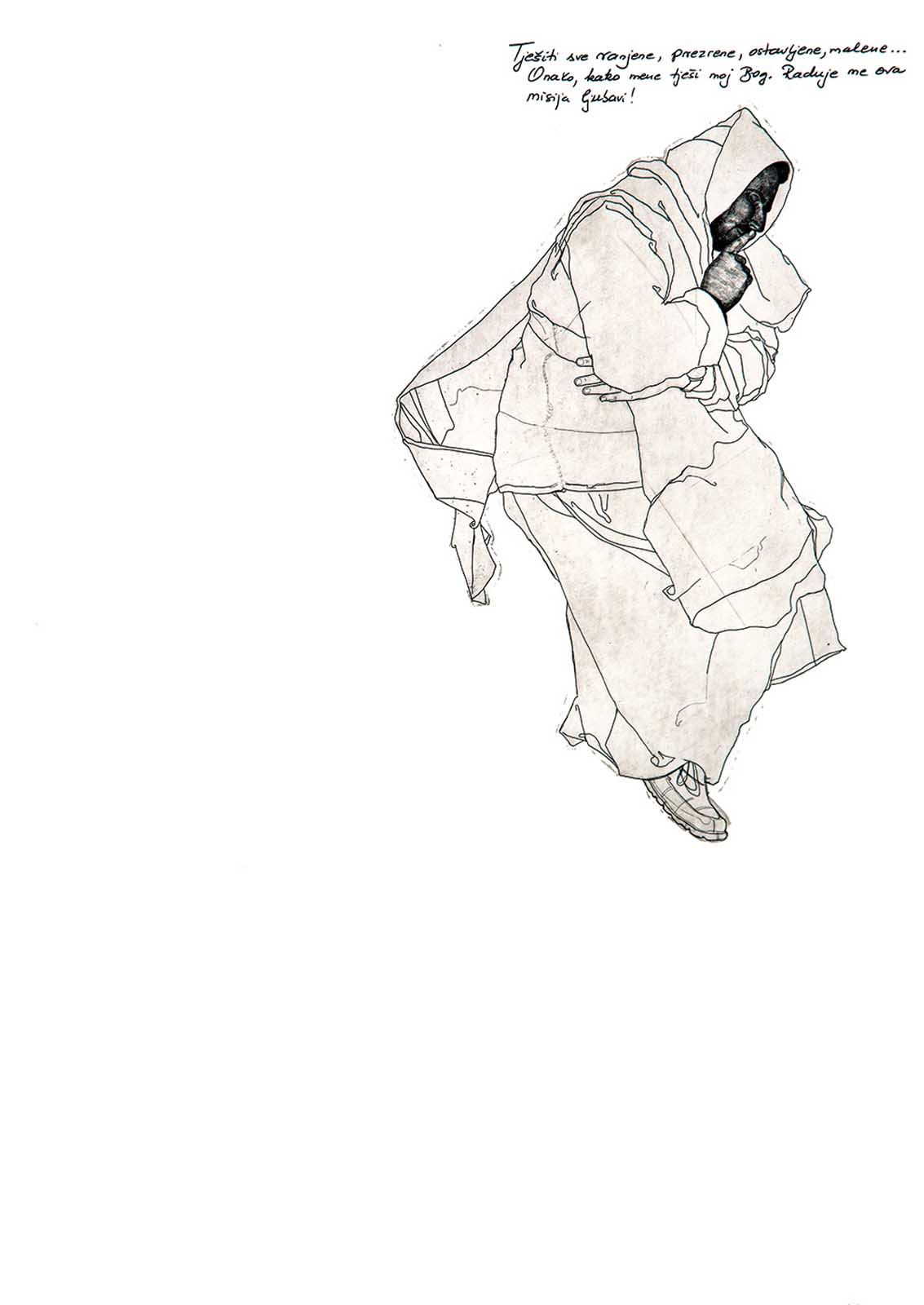 There are some universal themes, contents and areas that are “eternal” in the Western art, never mind the cultural conditions, social circumstances or stylistic changes. If, however, they are rigidly set and if they are the product of dogmatic principles, they often lead to petrification of artistic procedures, to repetitive relations, to uncreative repetition of ready-made formulas and to a kind of resentment towards “real”, “only” and “correct” ways of artistic speech, that is, until the latter qualifier, even without a corrective error, is easily transformed into the word – “washed out”.

Contemporary sacral art is not, surely, the only field where worn-out models appear, but it might have the most visible paradox between the greatness of the idea and the shallowness of realization, between symbolic thematic capital and new interpretations, finally between powerful stocks and condensed content and their wordless readings and non-inventive realizations. Simply put, those for whom a mere reference to the theme is a sufficient alibi for a painting or a sculpture (or other creative act) often fail on sacral themes, or, worse, those who think that believing, that means, a world-view relation , is in itself a sufficient guarantee for artistic realization.

Therefore, a certain reserve – I see – bothered other foreword writers for Cycle XIV by Matko Antolčić (Dr. Franko Čorić, in the catalogue of the Bjelovar exhibition), a cycle motivated by the sensitive theme of abortion set in relation to the great theme of the Way of the Cross. We may be unfair to the young painter and graphic artist from Čazma with this apriority, but let us – in the conciliar spirit of the exhibition messages sent to us – be forgiven of doubts in principle, especially since the final outcome – a positive judgment of his work – gives us an even more convincing dimension.

So, at the beginning we have to repeat: the topic is taken over, extremely brave in its explicitness and completely open to non-artistic interpretations. The value of Antolčić’s action lies in the fact that he knows how to bring the verbosity, literariness and symbolism of the topic to artistic purpose and that he manages to conceptualize the possible literalness of reading the project to the extent that it loses artistically non-functional connotations. At the same time, of course, he doesn’t relativize his own beliefs and passions and does not even neutralize the apodictic or certain preaching pathos of verbal revelations, from the mouths of the protagonists of his fourteen “stations”. The author, therefore, does not run away from the idea, but this “ideation” is fully convergent to the language, style, speech of his works: it is purged, condensed, simplified, grounded and most importantly turned to life.

Facing the dilemmas that are today the subject of medically, philosophically and ideologically opposed solutions, the artist’s task – if he is already intimately committed – is to speak about this dilemma from an extremely subjective perspective, but personalizing the position of each of his “interlocutors”. Namely, Antolčić symbolically places his colleagues in the stations of the Way of the Cross – emotionally and ideologically close persons – with their feelings and narrative statements about their intimate happiness that they are – alive. The problem of abortion is thus interpreted in a form that avoids any surface, daily-political, ideological and poster level or drastic quality and scandalousness: thus its “spiritual renewal” mission is deprived of projective nature and eschatological weight and is completely turned to unrestrained celebration of life. The statements and positions of its protagonists are such that they directly or symbolically testify about the “way of the cross” that every man goes through, but all these doubts, fears, loneliness and silence do not prevent them, in the name of love, forgiveness, hope and faith, from being thankful for the luck that they were born.

Antolčić’s entire graphic cycle, almost comic-strip narrative, is simple, reduced in process, with precise drawings of characters in positions reminiscent of embryos in the mother’s body, devoid of anything superfluous, with great whiteness and airless spaces where bodies levitate. The possible unbalanced affective charge and even the danger of a direct relationship between the two media – written words and images – is loosened by this convergence of style, a simple and powerful gesture to suppress and reduce the narrative, non-artistic dimension, and accentuate and emphasize the visual and ideological side.

Perhaps it is too brave to talk about the possibilities of a young author on the basis of one cycle which is, moreover, his diploma thesis (with professor Mirjana Vodopija, whose mentorship is undoubtedly motivating. But, we can send encouragement and express faith in visual speech by reduced means, despite the fact that we are also aware of the possibility of reading all commendation as conventional, benevolent, phrasal messages.

Compromises and the province knew how to direct many talents towards effective, luxurious solutions on the occasions of Antolčić-type thematic orientations, towards the satisfaction of the masses and the interests of the client, which – not necessarily, but almost regularly – led to the initial promise to fade. This will probably not happen with Matko Antolčić.