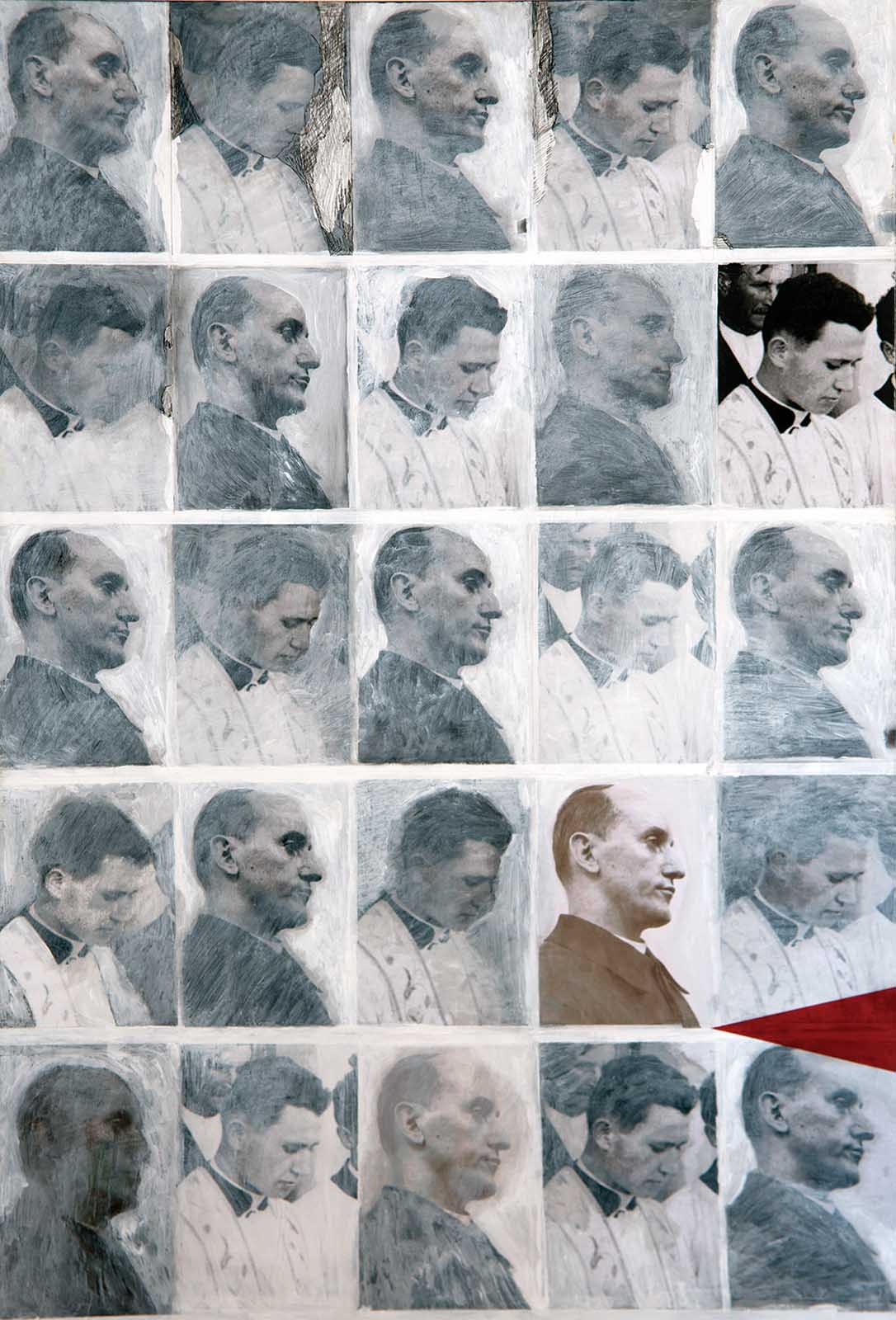 Croatian saints and the blessed ones in our nation

Scenes (portraits) of saints belong and do not belong to the religious art space. On the one hand, this is not questionable because these are the people who have completely devoted their lives to God, died (and as martyrs) in the sign of sanctity, elevated to the honour of the altar, and thus affirmed their dedication to the transcendental in the most complete way. On the other hand, in the stricter terminological division of the character of artistic motifs, the sacred is connected with the achievements emerging from the scenes of Christian iconography and further theological deepening of these themes. Understandably, the saints as participants in the occurences described in the Gospel become a vital part of the iconographic framework so that in this context their dimension of the sacral atmosphere is indisputable. Generally , all the paintings and sculptures in the church interior (unequal artistic quality is another issue) hold the full width of the concept of sacredness, and improving the aesthetic and religious impression of the space, they are a call to piety and meditation. It is similar, and sometimes almost identical, to the images of religious significance in our private spaces as well. As an ornament and a sign of a person’s own conviction. Anyhow, the holy role models and heavenly advocates become closer to us in the image, more real in their presence in the heavenly homeland.

Artists, including Croatian ones, during history and nowadays, have interpreted the figures of saints who depict the “more popular” ones respected by the whole Church, as well as those especially dear to us – Croatian saints and blessed ones, many of whom left deep traces with their lives and deeds, even outside our country. Artistic approaches are, clearly, different; from idealization, figurative vanity, expressionist freedom in the treatment of form and color to examples beyond the conventions of stylistic determinations. Laudato Corde Gallery has enriched the event “Days of Croatian Saints and Blessed Ones” with solo exhibitions of artists (for instance Mataušić, Homen, B. Dorotić, M. Vidović) who expressed their experience of the Church greats using interesting poetics in interesting cycles.

In the painting materialization of Croatian saints and blesseds, Matko Antolčić successfully brought the freshness of the approach by sensitively avoiding any scheme of repetition. He is not interested in formulae, he is interested in meeting these great people. He created less artistic and substantial logical wholes, showing both exceptional classical design skills and artistic inventiveness. Antolčić does not hesitate to describe, but he goes beyond the rigidity of the factual. Finally, we don’t know what some saints looked like physically, so “reconstructions” are just images of the possible. And the well-known portraiture is subject to a measure of artistic transformation. Antolčić came closest to realistic precision in the illustration of St. Nikola Tavilić, the Blessed Grace of Muo, the Blessed Augustine Kažotić, the Blessed Ozana of Kotor, from whose earthly paths we have been separated for centuries. He connected them with the same handwriting based on a technically interesting combination of acrylic, charcoal and pencil. Antolčić used elongated large canvases to form legible volumes of sculptural strength in the profile of entire figures, both in their standing or sitting positions. Dominant draperies in the clarity of the relationship between black (brownish) and white parts with the purity of nurtured tonal shades are in line with the concentration of faces of noble simplicity. At the artistic level, Antolčić emphasizes the inner peace of people close to God with his reduced form and refinement of the surface (dark and light surfaces suggest an interior segment). In paintings such as the representative altar polyptych, Antolčić preserved the necessary closeness, intimacy in dignity. A certain polyptychality has been achieved with the multiplication of fields with characters, hopefully the future saint, now the Blessed Alojzije Stepinac and the recently proclaimed as Blessed Miroslav Bulešić. Using two identical portraits (on the weft of the photograph), Antolčić creates a rich layer of content in a rhythmically correct change, and their presence among the people, and their dialogue in mutual suffering. A complex artistic sentence was applied to five graphic sheets (drypoint) with portraits of the Blessed Ivan Merz in which Antolčić pushes the degree of descriptiveness. Defending their beliefs in love for Christ, the blessed martyrs of Drina, five nuns from the Society of the Daughters of God’s Love, went to their deaths. Understandably, Antolčić again resorted to the form of a polyptych, painting with oil on glass in a window frame, showing martyrs in the fullness of the blackness of religious clothing, with only a few accents of white. Antolčić shapes the figures with Croquis directness, contrasting the flash of glass with the heavy masses of dull tones. So simple, and yet the impression is so poignant.

In his will and need to touch on great styles and contemporary art trends, Antolčić ranges from the concept of, conditionally speaking, Renaissance portraiture to associations with Warhol’s portraits. So, he portrayed St. Marko Križevčanin and the blessed Katarina Kosača Kotromanić in the pose of ancient nobles, developing the surface with the texture of his characteristic flicker of strokes, and the figure of Marija propetog Isusa Petković was created through a coloristic clash of the same, hyperrealistically done, portraits (taken from photography). He interpreted the great confessor St. Leopold Bogdan Mandić with an installation, a realistic portrait was placed behind bars, the confessional one. And in front of the picture there was a kneeling desk. So symbolic and beautiful. The conversation with the saints can continue. Through Antolčić’s works of artistic persuasiveness, too, inspired by the spirituality of holy persons.