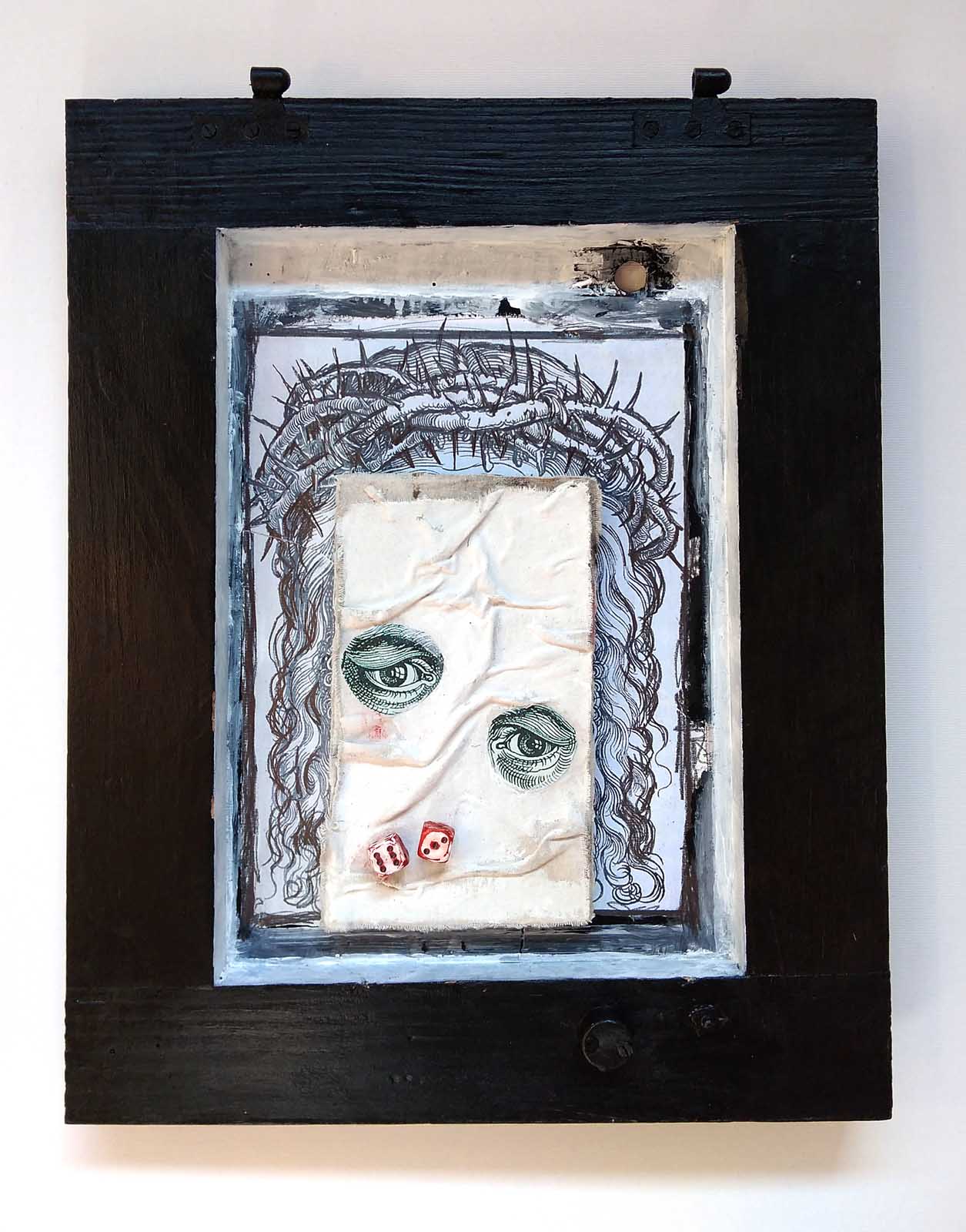 Perhaps the works belonging to this exhibition represent best the interests and artistic sensibility of the academic graphic artist Matko Antolčić. Anyone who has visited his atelier in Čazma knows that his artistic interests are very broad. Primarily, he is a master of graphic techniques and an excellent draftsman in pencil and ink, but he also experiments with easel painting, photography, collages, assemblages and interventions on ready-made objects. Thematically, ever since his graduation thesis (with the theme of the Way of the Cross of the Unborn), Matko has dealt with sacral and religious motifs and contents, his personal past as well as the past of Čazma, the town he grew up in.

The exhibition consists of the works that refer to his historical and artistic role models, the works from the Sacred Identity cycle, the cycle Arma Christi, several works thematising Čazma’s sacral heritage and a few assemblages.

The first group is represented by the works “In the atelier” which refer to the famous Albrecht Dürer’s graphic from 1514 which shows St. Jerome and “Stepinac in prayer” which refers to the Venetian theme of Renaissance and Baroque sacral painting which is known as sacra conversazione in historical-artistic terminology (or holy conversation) . In both works, as well as in the works from the Sacred Identity cycle, the idea of ​​actualising historical-artistic or religious role models in the present time and our space pervades. In this way, Matko’s atelier and the retriever Bela allude to St. Jerome in the study, while in the historicizing piece of work dedicated to Stepinac talking to Mary and playing with the child Jesus there is a missal of Čazma’s abbot Juraj de Topusko. Matko also had a series of videos in which he, with some people from his surroundings, recreated scenes from some historically and artistically important paintings, especially sacred conversations. We can follow a similar idea in the cycle called Sacred Identity. People from Matko’s real life and surroundings were models for the characters of St. Apollonius, St. George, St. Thomas Aquinas, St. Francis of Assisi, St. Mary Magdalene and St. Dionysius of Paris, all of them shown with their characteristic attributes.

Arma Christi, Christ’s tools / weaponry is an iconographic term for items that were a fundamental part of Christ’s passion. These are the cross, whips, crown of thorns, Veronica’s handkerchief, nails, mallets, ladders, cubes, spears, reed with a sponge, etc. Angels in crucifixion scenes have often carried these objects in their hands in Western iconography, ever since the Gothic period. Older believers could also remember the crosses with the mentioned items and the rooster often displayed in churches and used in the devotion of the Way of the Cross. In this cycle, the author uses the techniques of pencil on paper and assemblage. Matko’s pencil on paper shows his expertise and brilliance in this technique, while the elements of composition and the contents are responsible of the effect of surprise or astonishment that usually accompanies this topic. So, on one of them we can see Matko’s ear on a tray, and on the other piece of work the rooster of betrayal. The most touching part of this cycle might be the assemblage of Veronica’s handkerchief, which is also the most artistically avant-garde. Among other works, Mother of Pain stands out with its dimensions and emotional charge.

We are often under the impression that a lot has already been said in sacral and religious art and that there is no space for a new interpretation. But, Matko Antolčić shows in his works, in an intimate, emotional and refined way, respecting classical techniques and their rules, that one can be both a believer and an artist, religious and contemporary, traditional, but also provocative and innovative.